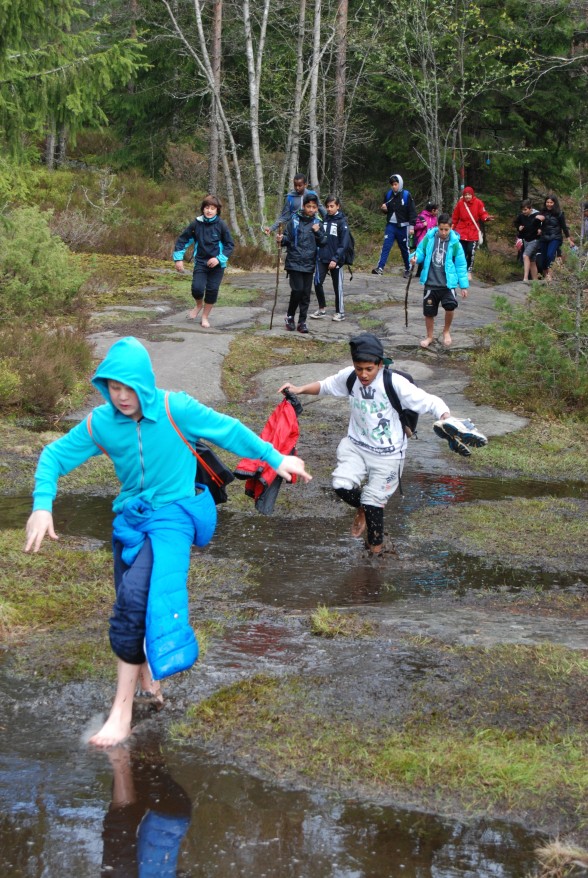 Really I should be writing every day. Every day, a new bunch of kids, every day so many new meetings with the ancient pilgrims way.

We’ve been walking, pretty much every day for five weeks.

A graceful Somalian girl says ‘Going barefoot, it makes me feel like a real lady.’

This year were some kids from the more affluent side of Oslo. Kids who come from rich West side think this Eastside is scarey. But now they feel the adventure and history and kindness which is here too. Three girls from Kjelsås say they will walk to Trondheim when they get older.

A boy, he looked tough but kept picking bunches of flowers. During Per Jostein’s telling of Olav the Holy he quietly made an installation of twigs and stones. An artist. He told me he loves nature.

A kid asks – Do you beleive in God? I do, they say. I remember when I was a child, you couldn’t say that, it was uncool.

Norwegian kids are not brought up to share food. You bring your pack lunch, you eat it. But the kids from immigrant parents, they are different. One quiet mix race boy, kept following me. He said, you must be hungry, he shared his water then a lovely potato and home made meat ball.

Some days in April were unbelievably cold. As a medieval pilgrim I have no waterproofs and some of the kids do not have good equipment either. We are walking barefoot on the freezing ground. I hear squeals but no complaints.

At one point a bunch of robbers attack us – here you can see the robber chief in black on the hill, preparing to attack us. 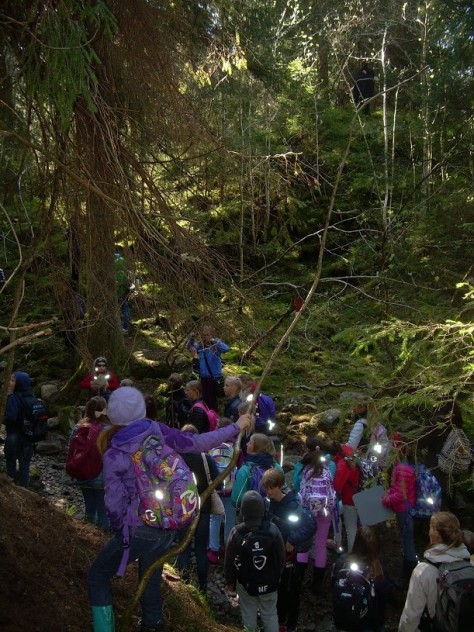 The teachers are fabulous, we meet so many great teachers. But they can be so insensitive. The kids are in the middle of an adventure where I have been walking overland for 6 years. The teacher comes up and ask me how long I’ve been working as an actor etc. 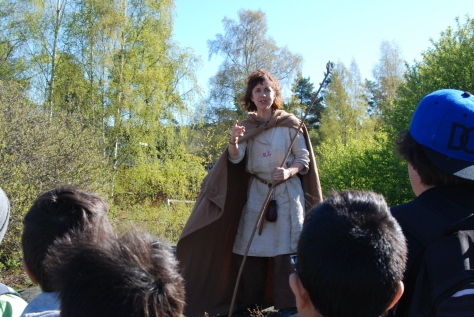 We are collecting gold coins. A short stocky boy is walking along and he says – ‘Today its not just about gold and material possessions! Other things are far more important. Listen! You should listen to me when I say wise things like that!’

Usually there are one or two kids during the 4 hour walk who hang extra close, have extra many questions. Might be a boy, might be a girl. One day 60 kids from the school at the end of my garden joined us. Most of them have parents who have gathered here from the far corners of the globe. Oslo is divided East West and most of the East side kids dont have white skin. But this girl was one of the few who did. She also had freckles and we both knew just the little hillock we wanted to sit on for lunch. She told me about how her family from the far North, Sami blood. We got on so well and she suggested that since I am a pilgrim and often have to sleep outside, I could stay that night with her. She had a spare room or maybe I could stay in her room. She could cook for me and show me the stream where she plays.

This happens fairly often, this kind of hospitality amongst kids which you pretty much never find amongst adults in our super rich town. The other kids were intreagued – ‘Hey the pilgrim is going to stay the night with her tonight!’ It was building up and I was starting to feel a bit bad. Near the end of the walk I say to the kids – ‘Am I really a pilgrim from the Middle ages?’ ‘No!’ says someone. ‘Does that mean I am lying to you?’ I explain that although I am not several hundred years old, the story I have told is based on a historic tale. A woman who tried to kill her husband and had to walk for 7 years through Europe as a penance before she could go back to the North of England. Otherwise she would have been burnt as a witch or put in prison.

Well this particular day, I liked that girl. I knew somehow that life was not so easy for her, she told how hard it was for her not to eat too much and she missed her mum. And I didn’t want her to feel betrayed or disappointed. So I decided I would go over to her house anyway since it was not so far. Another 20 minute walk is not so much after all. She was there. We went out and together we discovered a viking grave, just a few minutes from her house. We discovered we both love trees and she showed me the stream where she and her brother have made a den. We cleared up some plastic to make it more beautiful. She showed me the tree she loves climbing. We went home and she made me some tea, and then she read me her poems full of incredible insight! I asked her over to me the following week as I live just below her school and wanted to show her my ducks.

Later she sent me a message. Her stepmother said that she couldn’t come, she had to go shopping that day. 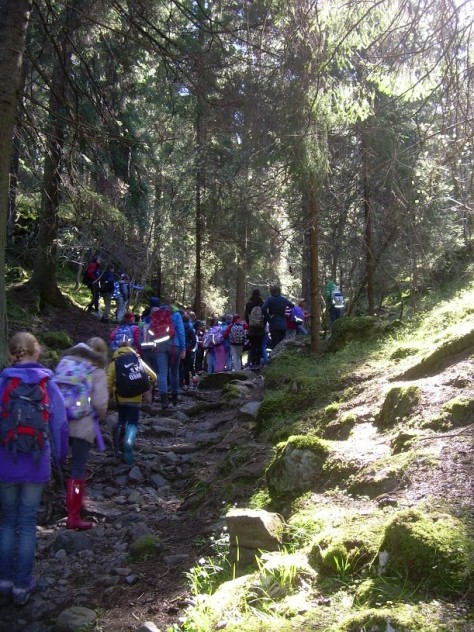 The individuality of the kids emerges as they have time to play, picking up their sticks and stones.

I ask how was it to walk in silence. ‘Deilig.’

Many wanted to be pilgrims, talked of getting their family to do it with them.

One thin active girl tells me towards the end –  ‘This is the best thing I’ve done. And I’ve done a lot of crazy stuff.’ 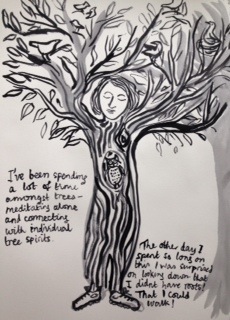 Nearly eighteen years ago me and my family dug up the roots we had so carefully planted in the countryside of England and moved to Norway.

But after some months there was something that I did miss. I swear to you the first thing I missed when I moved to Norway were the English trees. The giant beech tree, with its grey bark like elephant hide. The spreading oak with its tens of thousands of shiny acorns each sitting in its own dainty cup. In the winter I missed the spiky holly and in the spring I missed the hawthorn. Its blossom lining the hedges like scented snow. I really missed the English trees. 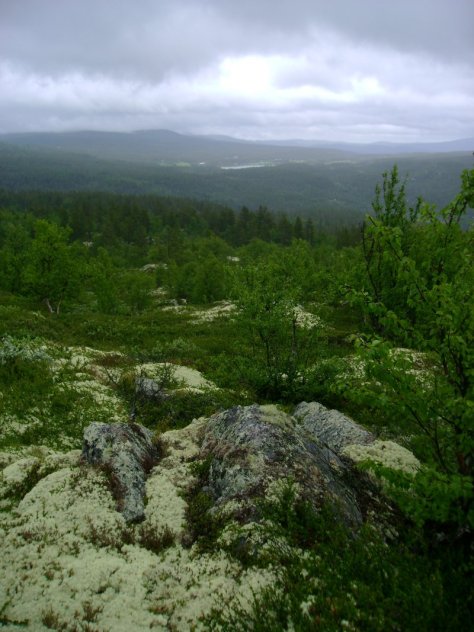 Its not like there are no trees in Norway. Check it out – the whole place is one gigantic forest. BUT they were totally the wrong kind of trees. When I was a girl they started planting fir trees in long long endless lines across my country. If you’ve trod in one of those arid spots you’ll know its less a forest than a sad prison.

My Dad told me – ‘You see those trees, they’re foreigners! They have shallow roots, they make the earth acid. They don’t belong here. They should go back where they bloody well came from!’ Well Ok he didn’t actually say that last thing but the fact is, like it or not, I was, and I’m not proud of it… But I was a Tree Racist. I despised needle trees one and all.

Until one day. I was sitting outside. We had moved out into a log cabin. The garden was a little forest, emerald moss studded with white wood anenomies and flowing beside us the black Sørkedals river. It was then I saw her. In all her grandeur and poise. Her branches, each one just a tiny bit wider than the one above, she held them curving upwards, like a graceful ballerina. For the first time I had fallen in love with a Norwegian tree. And its just gone on from there really. (See Trees)

It took a long time for me to see the Rowan. Crazily I thought it was some kind of weed. There is one in my garden and I was going to cut it down! Then, mainly due to my Finnish friend, the Finns have a deep history with trees, (we all do, but they sometimes remember it). She told me that the Rowan is a holy tree. A feminine tree, women used to give their girls a coming of age ceremony with Rowan in the forest.

In Norway its been a protector. They would put a sprig over their doors or the barn door to protect the brown eyed cows. The 90 year old man we walked with on the Pilgrims way would crunch a berry and offer it to the kids. ‘These kept us healthy during the war.’ He said.’So many vitamins.’ Since then its beauty has revealed itself to me, and when I tried to steep the leaves as a tea, I couldn’t believe the taste. Its like Almonds. Why don’t we all know this?

Its looking very much like I’m going to die here now. I mean hopefully not right now. But my roots are growing year by year. And when I do, I hope my children will take a little sapling. Perhaps a tiny rowan or a birch. And plant it over my body. A body I’ve spent years feeding, full of nutrition. And then that little tree will start to grow its roots down into me. 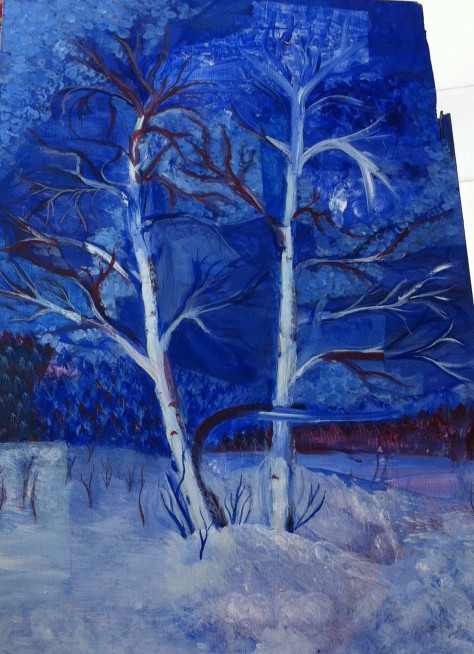